Fundraising in the best of circumstances is a challenge. Throw in all the fear and uncertainty of a global pandemic, and that aforementioned challenge becomes a herculean effort. 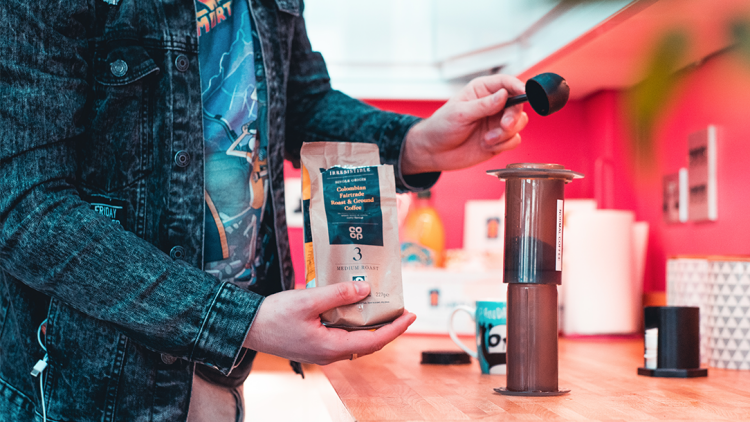 Fundraising in the best of circumstances is a challenge. Throw in all the fear and uncertainty of a global pandemic, and that aforementioned challenge becomes a herculean effort.

Recently, we covered that very topic in our Tech For Good Talks about technology and the future of fundraising, read all about that here.

But we wanted to know more. To dive deeper and get an even better understanding of what charities have been facing for the past 7 months, so that is exactly what we did.

What a better way to really understand the full scope of how this sector has been affected, than by sitting down with the experts and getting some good ol’ fashion face to face time in?!

The slight, and obvious problem is, COVID.

A meeting of minds in real life wasn’t an option, and we were keen to shake up the bog-standard virtual meetings that have been all of our bread and butter recently.

That’s where the lean coffee format came in clutch!

What is a Lean Coffee?

If you aren’t sure, simply put, a lean coffee meeting is a structured but agendaless meeting. We’ve all been in those meetings, that if you aren’t facilitating, or didn’t write the agenda, it’s extremely hard to be fully vested in it.

Which is what makes this format such a great way to mix it up. The entire meeting is dictated 100% by the participants. From the topics covered, down to the amount of time spent on it, it is controlled and voted on by the group. Every single person contributes to the democracy of these meetings. Or Cube-ocracy, if you will.

So, one rainy Friday morning, our superstar guests from senior fundraising roles gathered with our MD, Rich, and Head of Commercial, Gabby for our first inaugural Cube Coffee Talk.

An hour later, and a meeting that could have easily gone longer, we walked away with a breadth of information, new friends, and a new kick-ass way to host a meeting!

While I could go on for (p)ages with everything that was covered, I’ll just break it down and give you all the highlights and key learnings.

5 Things we learned about the future of fundraising and the support technology can offer:

1.Talk about the good stuff

Every cloud has a silver lining, and that’s what we kicked off the meeting acknowledging. We all have our COVID moans on the reg, have gotten into the habit of rapid-firing the latest doom and gloom into a conversation, but we wanted to hear some good news to come from our attendees. Some positivity to come out of 2020, even just a sliver.

And they did not disappoint!

One of the first points made was, something that quickly stood out was that supporters become the core of the focus. The drastic way in which policy and procedure had to instantly change to accommodate going virtual, has overridden a lot of those internal meetings that keep the wheels turning. The bureaucracy and red tape that previously existed, has shifted into the supporters becoming the true priority, and the entire organisation has gotten behind that refreshing change.

The focus on the supporters and nurturing more of a 1-to-1 relationship is something that several attendees said they wanted to keep happening, even back in the office!

When things go wrong, it’s inherently in human nature for us to band together and do what we can to lend aid, and that truly was something everyone in the meeting talked about having witnessed time and time again recently and just how humbling it was to be a part of.

2. 99 problems and too many donations are one!

While there really is no such thing as charities having too much money than they knew what to do with, the influx of donations at the beginning of lockdown was just unprecedented (that word has been officially retired from my vocabulary, UNLESS it’s describing something wonderful).

Several participants noted that while everything was kicking off, and shoppers were fighting over bog roll, supporters were stepping up massively and donating in record-breaking numbers to these organisations. Which meant frontline workers were the direct beneficiary of this. Vulnerable children had the support they needed now more than ever. And there was a surplus of supplies to distribute to those who needed them most.

For the first time, some of these charities flipped their comms and were able to put the spotlight on the hero’s within their ranks and the invaluable work they were doing for it.

It is this change in information that donors were getting, that was the driving force behind so much support in Q1. People could access at their fingertips what their money was going towards. The normal walls of communication were gone and they could see the physical evidence which their contribution was being used. Pretty much across the board, none of the attendees has ever witnessed communities coming together and supporting one another in the way that they did in the face of the pandemic.

The drawback being was that some of these fundraising executives don’t know how they can possibly match these numbers for next year when the need for them will likely be greater.

3. How to keep teams positive and support them through difficult change

There is a lot of uncertainty and nervousness surrounding the future of some of these charities as restructuring and change is going to be inevitable in the current crisis. But until those shifts come to fruition, our attendees were keen to chat and learn from each other the various ways in which they were keeping their team’s morale upbeat, positive, and all on the same page. Here are some top tips from the experts!

4. Is now the time to diversify your business or double down on your core services?

At a time when budgets are harder to sign off on, and long term revenue is not as secure as it’s been, do you use this as an opportunity to pivot or double down? Our coffee crew really enjoyed kicking this one about and sharing experiences with this.

For quite a few, they had plans and ambitions to become more digitally focused and everything that’s happened has accelerated plans for that happening now, as opposed to some vague future goal. It means the amount of money that was being spent on face to face was considerable, and now means there’s now this unforeseen budget to test digital and try new things!

The temptation is to batten down the hatches and turn spends to a trickle. But that doesn’t necessarily mean that’s best. In NOT doing a knee jerk reaction and cutting marketing budgets, several people noted even more support and leads as a direct result. Because that was what so many other organisations were doing that it felt wrong, but staying on course actually proved more effective and they are now not scrambling to fire those services back up and get the incomings that they all desperately need.

It has been a tightrope walk of sticking to what you know and diversifying. It is so important that your business is agile enough to be able to effectively execute and benefit from both.

5. Virtual fatigue, is there a cure?!

A sticking point with many charities is that events are their bread and butter. Now that the big-ticket fundraising events couldn’t happen, we got to discuss what worked and what didn’t and how to appeal to sponsors for something involving even more screen time.

This is an issue every single person can relate to. No matter how fun the “pub” quiz I had planned with friends after work, nothing sounds worse than sitting in front of my computer for one more second after the workday was over. And that is what every single charity is up against now.

Some found creative ways to engage donations. A virtual marathon, but a very real and physical ribbon sent to commemorate their accomplishment. This has proven very effective in getting the population out and about, bringing awareness to their organisation, and offering something tangible to ensure more follow-through.

Others are fighting through virtual fatigue by offering up meaningful and engaging content. Taking down the barriers between the sponsors and sponsee and encouraging them to interact in a way that they otherwise would not have.

The expectation for really high quality, overly produced content has gone down. These organisations are finding that by showing the raw, unglamorized footage they have of frontline workers and rescue operations and getting far more engagement than its glitzier predecessors ever received.

I think the moral of the story is that people are just seeking human contact in this new virtual world. So anyway you want to emulate that digitally, the results are there.

This new meeting format really was above and beyond what we were expecting! Thank you to all the participants and the wonderful work you are tirelessly doing out there in the world. Until our next Cube Lean Coffee Talk, we’ll see you soon!

Up Next
Tech For Good Talks: Future of Healthcare
We use cookies to ensure that we give you the best experience on our website. Read More
ACCEPT ALL COOKIESSET COOKIE PREFERENCES×
Manage consent