Matt Jerwood, a Digital engagement consultant, who has worked with Oxfam and Tommy’s, joins us to discuss how he has helped shape the world of digital fundraising. 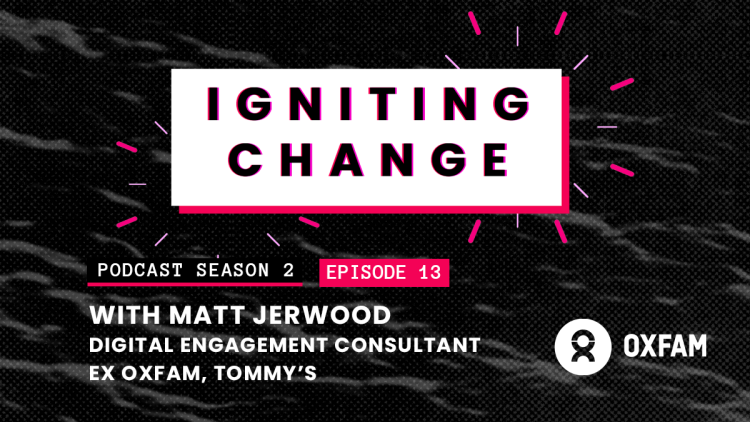 This week Rich and Gabby sit down with Matt Jerwood, a Digital engagement consultant, who has worked with Oxfam and Tommy’s, joins ‘Igniting Change’ this week to discuss how he has helped shape the world of digital fundraising. They were excited to talk to Matt about the incredible work he has done in the charity sector throughout his career!

Matt Jerwood is currently the Head of Fundraising and Communications at Restore and works freelance in Digital Engagement. Restore is a charity that works in adult mental health, and works in recovery with their values:

Mental illness affects one in four of us in our lifetime, but people can and do recover.

Restore is an Oxfordshire mental health charity that supports people to take control of their recovery, develop skills, and lead meaningful lives. They offer recovery groups, training, and employment coaching to make this possible. Restore is one of the longest-established, and most highly-regarded community rehabilitation services in the UK. Founded in 1977, and are part of a partnership of local mental health organizations with a commitment to helping people to recover, stay well and participate in and contribute to the life of our county.

Technology and the charity sector

Back in his Lastminute.com days there was massive change and innovation quickly happening so that it somewhat felt like there was a race to get there first. It was important for them to be at the forefront of innovations to stay ahead of the game. However, that has changed in the last ten years, and certainly so in the charity sector.

There are lots of brilliant, out-of-the-box tools to choose from, at this stage in the game choice is the problem. Instead of that race to innovate, the technology is there, but therein lies the problem of which one to choose!

There is a different appetite for the risk and the potential around the risk. In the business and corporate environments there is a great opportunity around doing things and being there first. In the charity space, there is a bit of risk around that. They don’t want to be the first out of the gate, but third or fourth is preferable because you’ve seen that solution work and can go forward more confidently to offer it to your audience.

The charity sector is also notably more transparent with the innovations they have used. What was used and worked for one charity isn’t hoarded and hidden, but an open space to share what has worked so that your organization can learn from another, then use and build upon it.

There is a bit of risk aversion with charities. If you are working for a charity and want to try something shiny and new, it’s so important to remember where that money comes from. The money that your friends and family are donating to that charity is for the specific intention of that money going towards a cause they want to support. You don’t want someone taking an unnecessary risk with that money so that it is not being used how it was intended.

I can understand where that risk aversion comes from and is often appropriate. But other times I think let’s go for it, this is a safe bet!

It always has to come down to what’s the problem you’re solving and making sure it’s not a solution looking for a problem. Don’t get distracted by the shiny new bit of tech!

Something they were trying to overcome during his time at Oxfam, was the distance between the people who were supporting and the “thing” they were supporting by bringing people closer to the impact of their donation. There was a need to introduce more transparency around where their money was going to build trust and encourage ongoing support.

The solution to this was an app they launched called My Oxfam which allows supporters to easily amend the amount they donate to the charity in any given month. To dial the donation amount up or down depending on every user’s needs. The app, which was launched in 2017, allows users to increase or decrease how much money they donate and set how the charity can get in touch with them by telephone, email, or post. The app, which Oxfam said it believed was the first of its kind in the charity sector, also allows users to view video messages from Oxfam staff in the field, get live updates on emergencies, shop at the Oxfam online store, and access real-life stories from the charity.

That approach proved really valuable in getting the users engaged with the cause and created more touchpoints on the journey to donation. It wasn’t about it being an app, but an app is what they built; which was the solution to the problem they were trying to solve and how can technology facilitate that.

Challenges around delivering My Oxfam

The project was time-consuming for a few reasons:

The result of those challenges was a groundbreaking donation app that is designed to bring supporters closer to the causes they support and put control of their relationship with the charity at their fingertips.

Listen to the full episode here

To hear more of the conversation with Matt, listen now using the links below!

For more things tech for good, stay tuned to our blog or shout us a holla to get in touch with us, we would love to hear from you 💚