Yes you read that right - Legos are the solution to the nightmare that is scheduling. Most people struggle to manage their own time, let alone that of a whole team of employees. Luckily we’ve finally figured out the hack that turns scheduling into child’s play, unfortunately it wasn’t time-keeping robots after all. Read on to find out why you should ditch the conventional time-management methods. Besides the obvious fact that Legos are infinitely more fun to use than spreadsheets. 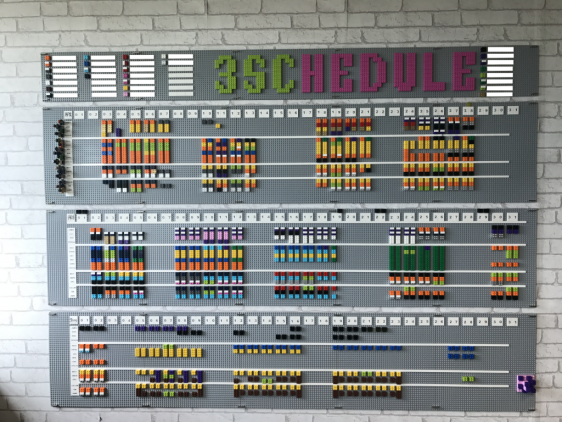 Why traditional scheduling never works the way it should.

There are plenty of different ways to approach scheduling, some Project Managers just let chaos reign and hope that everyone gets their work done on time, whilst others like to carefully plan out everyone’s day in a scarily complex document, which even takes toilet breaks into account. Although these are two extremes, you’ll probably know from personal experience that PM’s tend to favour a softened version of the latter method, and in theory, it makes sense.

It turns out that Project Managers still don’t have the ability to see into the future (what a shocker). Does someone need more time because their computer unexpectedly broke? Ok we need more time. Hmmm project B looks like it’s ahead of schedule, so I can pull some time from project B and put it into project A.

Great, Project A is back on track! But wait a sec, why hasn’t project B finished? What do you mean there’s a better way of doing it? Ok well maybe if we get some time back from ‘project A’… And so on and so forth.

What you end up with is Project Managers having nervous breakdowns in the corner of the office  and employees feeling under pressure to deliver results in response to estimates that were given 2 months ago. Basically everyone spends more time planning when they’re going to do the work rather than actually doing the work, which inevitably suffers as a result.

What about scheduling tools?

In the real world, the work that the teams were doing bore little if no resemblance to the schedule. So the project managers would continue to tweak the schedule to bring it back into line. In its worst excess people started to change the schedule retrospectively so that it looked like what had happened rather than what was planned. Utter madness.

We were using the schedule as a communications tool.

The ability to add notes to a set of time is a brilliant feature. As a PM I could add little notes to other PM’s for when they were doing a bit schedule fiddling. Hey we even used acronyms to show what can and can’t be fiddled with. A whole new scheduling dialect. Unfortunately we started to rely on it and before we knew it, our digital dialect had replaced proper briefing. We assumed that everyone had read our notes, and expected them to understand it.

Why we made the switch.

Our project managers controlled our schedule and it became obvious that they were playing the schedule shuffle a little too frequently, horse trading people’s time like it was potatoes. To schedule like this in a digital production environment is insane.There is no way that you can take account of all of the things that can affect a system. It’s like predicting the weather.

If you want to work on the edge of technology you are (or should be) constantly dealing with the unknown. So if we can accurately predict exactly how many hours a task will take, something isn’t right.

We wanted to make it harder to move things around. Changes to a plan should be an exception rather than the norm. Our thinking was that by making the schedule physical rather than digital, it should help to change behaviour.

So we went cold turkey. We took it off the computer, out of the screen and put it onto the wall.

Our (rather large) Lego schedule.

We decided to stick our very own massive plastic schedule on the central wall of our office, for everyone to see.

That way, if someone is making changes, they’re doing it in full view. This gives teams the ability to decide who needs to do what, and by when it needs to be done by.

This shift to a bottom-up scheduling method as opposed to the traditional top-down approach means that we are able to focus on the work itself, allowing us to get the job done better and faster.