Liz Bubel joins us to discuss her role within the American Red Cross and the development of the emergency app that provides life-saving information to every American... 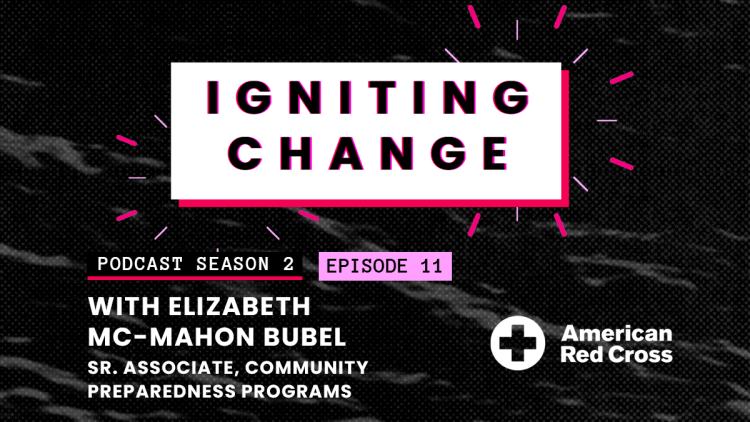 Climate change is causing more extreme weather events, and communities are routinely being devastated by these tragic disasters.

American Red Cross has worked for decades to get that life-saving information into people’s hands for emergency preparedness. However, their methods of pamphlets and training just weren’t having the impact they would have liked to see. More lives could be informed, and therefore saved if they were able to access that vital information.

There was an obvious need for a solution – specifically a mobile app that could educate people so they would know what to do in emergency situations, alert them when they’re in immediate danger and provide all the tools they need to make sure their friends and family are safe. It needed to allow users to prepare for, respond to, and recover from natural disasters.

The ability to access life-saving information is a human right; and those at the American Red Cross work tirelessly to ensure that right becomes a reality, which is why we are absolutely thrilled to welcome Elizabeth McMahon-Bubel to the podcast to talk about the incredible work she and her team are doing to harness innovation and make that information accessible to all.

Liz began her role with the American Red Cross after an impressive career in relief work, including working in Indonesia after the 2004 Tsunami and helping East Timor with micro finances and celebrating their independence.

After working across many parts of Asia, Liz wanted to return to the US for her work and found an opportunity within the American Red Cross. She began within the community preparedness team, and soon the opportunity arose for her team to work on the disaster preparedness app, and help to grow the community awareness of disaster preparation. Having previously not worked in the tech space, Liz found others within the American Red Cross team to join her in working on the project.

Liz and her team realized that some members of the community are disproportionately affected by disasters due to the accessibility of the information. One key demographic that was identified was non-English speaking Americans. With Spanish being the second most popular language in the United States, it made sense for the app to properly support Spanish. Much of the government advice on disaster announcements only supports English-speaking audiences, so providing support for those whose first language isn’t English can be critical in protecting lives.

By working with Spanish-speaking volunteers, Liz and the team were able to see the alerts coming out from government centers, which are usually only in English, and ensure that the Google translate integration that had been implemented was indeed working and providing valuable information. During hurricane Ian for example, the team was able to successfully provide safety information to over 1 million Americans, in both English and Spanish.

Liz has built onto the team by adding Spanish-speaking members who can articulate the power of the disaster preparedness app and spread the word with members of the Mexican communities within America, allowing for more members of the public to be prepared and spreading the information in an accessible way.

“This information is life-saving, and we take that so seriously”

Since its launch, the Emergency app has sent out over 3 billion push notifications. A staggering number when you think that that is 3 billion different alerts sent all over America to tell its citizens they were in potential danger.

There have been 500 thousand badges given for training within the app. That’s 500 thousand people out there that are now better informed on how to prepare for, respond to, and recover from disaster.

The app has 46 different weather alerts. With information for every single one of those disaster occurrences, every user is armed with safety information for EVERY contingency.

Read more about the project here:

What’s Next for Liz’s Team?

Constant evolution is something that is built into Liz and the team. By focusing their messaging and engagement rates, they are helping save lives and spread valuable information. Simple implementations such as quizzes increase the rate at which knowledge is absorbed by users.

Liz told us that the app is a constant journey, with more content being added and better ways of preparing people always in the works. As the technology improves, the boundaries on what is possible for the app become wider, and more options open up for the team. If the app can be more effective in delivering information, be more optimised or be better at communicating information, then the team is doing its job of keeping the community safe and encouraging disaster preparedness.

Since the beginning of our relief operation, 2,600+ volunteers have answered the call to help, providing:

Listen now for the full discussion

To hear more of the conversation with Liz, listen now using the links below! For all things tech for good, stay tuned to our blog or give us a holla to get in touch with us, we would love to hear from you 💚

Up Next
Igniting Change Podcast Season 2: Episode 13
We use cookies to ensure that we give you the best experience on our website. Read More
ACCEPT ALL COOKIESSET COOKIE PREFERENCES×
Manage consent