TIMI The Timekeeping Companion: A Story Of Trial And Error

Gone are the days of playing the guessing game when it comes to recording project hours. Introducing TIMI: The Timekeeping Companion, a device designed to record the time you spend working on projects, with the twist of a button. But TIMI didn't work at first. And went through five main generations before mark two was created. This is TIMI's story... 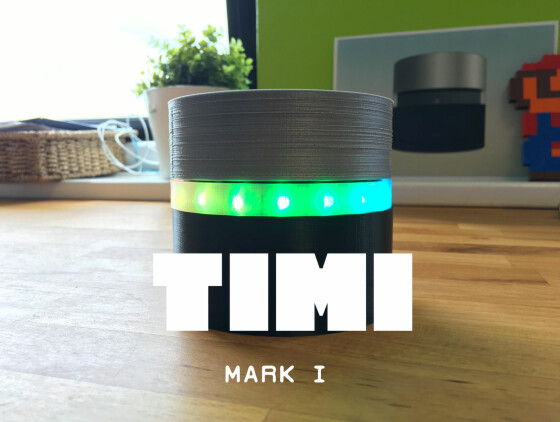 TIMI is a timekeeping device setup to help you track what you’re spending your hours on, by turning the device and using LED lights to set certain projects, the time you spend working on these projects is recorded in a far easier and more accurate way.

Gone are the times of filling in timesheets on a Friday afternoon and playing the guessing game when it comes to recording project hours.

But TIMI was far from perfect on day one, and mark two was born out of a few issues raised by the team:

Issue 2: It’s too much of a distraction.

Issue 3: It’s a pain that it needs to be plugged in.

Before TIMI evolved into the companion we know and love today (mark two), we went through a series of different generations during Innovation Time projects that were plagued with mistakes, failures and lessons we couldn’t have learned any other way.

This is TIMI’s story…

TIMI was concerned with his size.

Designing in SketchUp was a mistake as the software didn’t translate well with our 3D printer, TIMI needed far more design iterations before printing to ensure all his components would function properly.

Failures: Using the wrong software, not able to print accurately. TIMI worried about being too skin-deep.

Successes: Discovered a better software to use.

Failures: The rotary component was nowhere near robust enough. TIMI really did hit the bottom of the barrel.

By far the bleakest point in our story, we included a new 1200mah battery that would convert our companion from 3.7v to 5v in an attempt to reduce charging time. This however led to the base component melting (sorry about that TIMI).

Successes: Difficult to say at this point.

Failures: Components were misaligned and the new battery melted the base component. TIMI finally came to realise what he wanted out of life.

The inclusion of an air gap reduced the heat coming from TIMI’s battery. Multi-purpose components also allowed us to lower the number of slices and meant using Adafruit’s Feather development board, which combined the Bluetooth, lipo charger and micro-controller into one.

Failures: A few minor tweaks were needed to round off the design.

TIMI could at last look back and smile.

The final generation included a few minor tweaks including the addition of a more rounded charging hole. As well as a clipping system in the base which meant it could be removed far more easily for access to components.

Failures: There were none! (Just room for improvement). Finally coming together, TIMI had adapted to balance ergonomic design with technical functionality to create a fully-working, mark II prototype that solved the issues outlined by the team (too big, too distracting and needs to be plugged in). Features include:

The future for TIMI?

Now that we have the prototype, Barclays Digital Eagle labs have requested 20 units for each lab in the UK. We plan on continuing to research, test, experiment and improve on TIMI Mark II to gain additional functionality and uses.

TIMI can see himself being used as a cooking timer, to take turns in board-games and even act as an alerting system for those with hearing impediments.