Having been recognised as the UK's Innovative Agency of the Year, I wanted to share our story of turning frequent failures into successful projects through an agency initiative known as Free-ish Time. 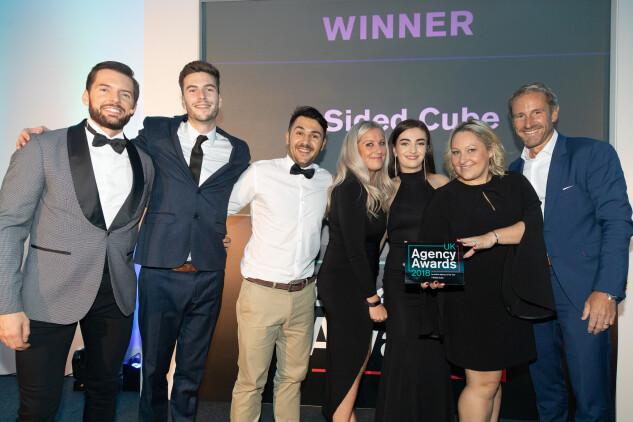 The road to becoming the UK's Innovative Agency of the Year.

We were recently awarded Innovative Agency of the year at the UK Agency Awards.

This felt like recognition for what has been a lot of hard work, not only from the creative and production side of the business that have been coming up with the amazing innovative ideas and projects that lead to the award, but also the operations team who have put in place the framework that has allowed that innovation to happen.

I thought it was worth sharing our experience of the journey.

Agency innovation is rooted in failure.

We have had a whole load of success by using disruptive technologies to solve problems. And as such are often asked by organisations to talk to them about innovation. How to make it “work”, or “real” or “profitable” or “just bloody happen”.

So as the go-to people for advice on how to innovate, when we decided a few years ago that in order to stay cutting edge we needed to have our own innovation initiative.

You’d think it would be plain sailing? Right? Wrong!

After 18 months of starting the initiative, we had very little to show for it. And the little that we did have bore very little relevance to our clients, potential clients, or anything that aligned with our mission. We needed a rethink.

After we had reviewed what we had done, it is fair to say we had ignored virtually every piece of advice we had ever given to anyone.

If you have any interest in innovation or have read anything about it you will be well versed in the importance of failure; but more specifically, how a Fail Fast, Fail Often, Fail Everywhere approach can benefit creative thinking and processes.

Embracing failure is vital to innovation (and pretty much anything worth doing). BUT, if you just read the headlines you can come away with the impression that failing is good in and of itself; that’s not the lesson to be learnt here.

The whole point of failure is to learn. Failure without learning is just failing, no matter how hard, fast or often you do it. We were doing a lot of failing, but what we weren’t doing was learning, certainly not in any meaningful way at least.

So we tweaked the output of the time that we spent innovating. We changed it so that people who had time set aside for innovation projects had to write an innovation blog about the time they had spent, and present their findings back to the team. We now have documentation of all of the activity that has been carried out, these projects can then be picked up and built upon in the future by different members of the team.

‘The best way to learn is to teach’ is one of those aphorisms that I tend to believe in. So getting people to present their learning in a short talk really helps cement ideas for both the individual and the wider team.

By doing this it doesn’t matter if the individual innovation project ‘fails’; by ensuring everyone has learnt something we have failed well. Which is another name for success!

James and Kev presenting their StoryCircle Alexa Skill back to the rest of the team during their Friday afternoon innovation talk.

Implementing innovation has to come from the top down:

The dream of anyone trying to develop an innovative organisation is that it comes from the bottom up. That it is so ingrained in the culture of the organisation that it wells up from the grassroots and floods out across all the activity they do.

But to get to that point you need to fight hard for it, and that fight needs to come from the very top. We sat down as a management team in a planning session and decided that to stay on the cutting edge of apps and mobile technology, we needed to put the team in the driving seat and let them truly own the innovation projects they were undertaking.

But that’s never going to work. It’s a long game, and everyone involved in the leadership of an organisation needs to be bought into it; if not they won’t push it when the chips are down. If the leadership don’t believe in the value of it, they won’t turn down that piece of client work so that the project that will almost certainly fail can be completed.

Other people in the organisation will (rightly) be swayed by short-term goals, such as revenue, or deadlines. It’s the hardest thing in the word to potentially disappoint clients, but you should know that they will be more disappointed in the long term if their tech partner has missed the boat on a truly impactful piece of technology.

One such example; Android developer Nikos developed an object recognition app for the visually impaired, which was seen by our partner LUSH and inspired our project with them in the world’s first package-free cosmetics store.

A user interacting with our object recognition app in the LUSH Naked shop, a package and plastic free cosmetics store.

Include as many people in your failures as you can.

We left it up to individuals to undertake innovation projects, but a dedicated individual or team cannot give you what you need; it has to be opened up to as many people as possible. Partly to get the buy-in, but also it’s a numbers thing.

The best results we have seen are iterations upon iterations of other people’s ideas and concepts.

Our Digital Impact Map project has had three innovation weeks with three different developers work on it, bringing their knowledge together to build a product that wouldn’t have been possible without this level of collaboration.

When we first set up the concept we had virtually no process around it. People just had time that they would use to explore new inventions. It turns out that this very laissez-faire approach wasn’t providing us with much in the way of useful innovation.

So over time, we have added some rails around the process that means that people can spend less time wondering how they should be spending their time, and more time actually spending it.

We give all of our scheduled team a week every six weeks to Free-ish time.

Free-ish time isn’t just for innovation, you can use it to work on any projects that you like. That could be other projects in the agency that are happening that you are interested in, backlogs of existing clients work, or innovation projects.

We build a backlog of ideas and concepts for the team to work on, these could be as simple as an idea, or as thought out as an existing project that we’ve worked on already. Before the week starts we all sit down and agree what the outputs from the week are going to be.

Setting a fixed output from the get-go:

Part of the deal is that there is a demonstration at the end of the week to the rest of the team and a blog post. The demonstration helps to focus the mind, and give a real sense of a defined output, that can otherwise get lost when you are experimenting or exploring new ideas you’re passionate about.

And that’s it. The success is down to the passion and willingness of our team to use emerging technology for good, coupled with just enough process to make sure that the start of each innovation week is spent thinking about the digital strategy behind what we are going to produce, rather than how we are going to do it.

Latest Innovation from the Blog

Up Next
9 Questions To Ask App Development Companies Before Hiring Them
We use cookies to ensure that we give you the best experience on our website. Read More
ACCEPT ALL COOKIESSET COOKIE PREFERENCES×
Manage consent