3 Sided Cube have been nominated for The Webby Awards for our work with the American Red Cross. The Webby Awards is the leading international digital award, honouring the best of the internet. 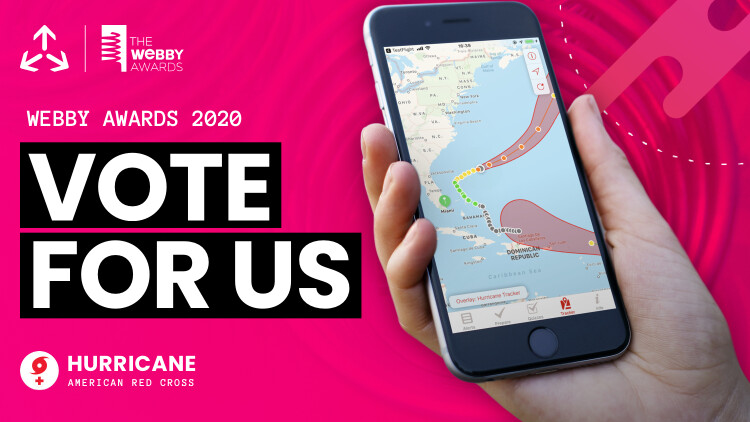 You know the saying, “no news is good news”?

Well. Get your party pants on, ‘cause we have SPECTACULAR NEWS!

3 Sided Cube has been nominated for The Webby Awards for our work with The American Red Cross! It is the ultimate honour to be recognised, so regardless of the outcome, you can find us celebrating the news in the lead up to the (virtual) ceremony.

For those thinking, “what’s a Webby award?!”

The Webby Awards is the leading international digital award, honouring the best of the internet. Think the Oscars, but for tech (with less celebrities and diamonds but other than that, same/same). We are so extraordinarily proud to be in such good company shortlisted for the award!

There are two honours presented at the awards, including The Webby Award, which is judged by a panel, and The Webby People’s Voice Award, voted by the public. YOU! That’s right. Our chance for the award lies in your capable hands. With great power, comes great responsibility (that Spiderman pep talk applies here, right?). So pretty please, pop over to the website and vote for us!

Why were we nominated for The Webby award?

We have been working with The American Red Cross for numerous of years on an app that has helped alert users to natural hazards and ensured that communities are well prepared during hurricane season.

However, to make this have more of an impact, we were challenged to use voice technology to broaden the reach of the hazard alert platform. The 3 Sided Cube team created an Alexa Skill that was simple yet informative by including real-time status updates and hazards notifications, allowing people to stay safe.

The team worked closely with Amazon to ensure that we were able to create an incredibly powerful feature for Echo devices that allowed the nation to keep safe and prevent disaster.

We are looking forward to the 24th Annual Webby Awards special Internet Celebration on Tuesday, May 19th and celebrating virtually!

Up Next
Agency Evolved: 10 Years of Tech For Good
We use cookies to ensure that we give you the best experience on our website. Read More
ACCEPT ALL COOKIESSET COOKIE PREFERENCES×
Manage consent