12 Days of Cubemas #10: From Fashion to Fundraising

We're all guilty of hoarding a bunch of clothes we either aren't young enough to wear any more. Aren't brave enough to wear any more. Don't seem to fit us any more. Or wish we'd never bought in the first place. On the tenth day of CUBEMAS, the 3 Sided Cube team came together to donate their clothes to people in need. More specifically, our friends over at The British Red Cross. 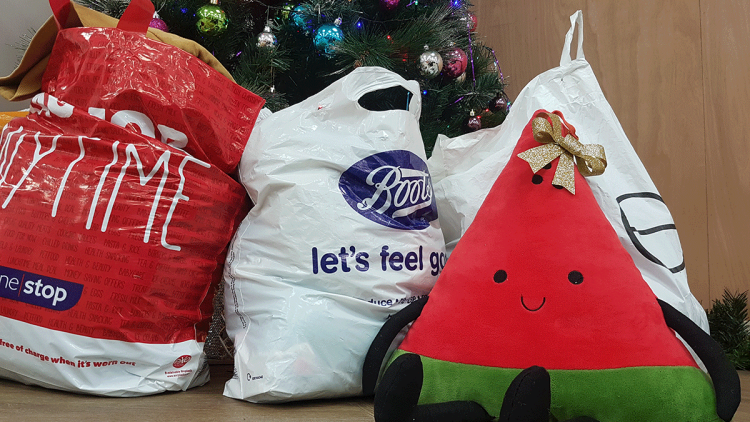 What do Cubes wear?

Okay so maybe we’re not quite trendsetters (at least not when it comes to fashion) but the donations brought in by the team were far from your average giveaways.

Ranging from bobble-hats to suit jackets, even Pip was tempted to take a few of the more unique items home (Pip likes to think of herself as a fashionista)! Well, not too far! We visited our local British Red Cross store carrying bags and bags of tees, jumpers, jeans and more.

It wasn’t a long trek through Bournemouth to get there, and on arrival, we were met by a bunch of friendly faces who were more than happy to accept the donations. As well as talk to us about the 12 days of CUBEMAS so far. In fact, this has been something that’s truly inspired us this Christmas; seeing how engaged, passionate and encouraging our community has been in the fundraisers, volunteering and donations we’ve made all throughout December.

Pip was there (obviously):

Usually, Pip can be found welcoming newcomers, playing with cool tech or posing for our amusement. Maybe more now that she can think for herself!

But during the 12 Days of CUBEMAS, she has really taken this to the next level, helping out with all the activities we’ve undergone and having a fantastic time in the process (her words not mine).

Helping people in crisis, whoever and wherever they are.

Responding to conflicts, natural disasters and individual emergencies, the British Red Cross is exceptional when it comes to supporting and relieving the struggles faced by vulnerable members of our community.

"Helping vulnerable people prepare for, withstand and recover from emergencies in their own communities."

How could we not be in admiration of the incredible and life-saving work that the British Red Cross carry out?

Especially at a time like Christmas, with so many vulnerable members of our community experiencing threats and dangers they wouldn’t usually go through during the rest of the year.

The suite of apps we built with the International Federation of the Red Cross was nominated for UK App of the Year!

The disaster preparedness platform was recognised for its outstanding achievements and the inspiring social impacts that the Red Cross has had on an international level.

So that rounds off the tenth day of CUBEMAS.

Up Next
12 Days of Cubemas #11: Volunteering at Waggy Tails Dog Rescue
We use cookies to ensure that we give you the best experience on our website. Read More
ACCEPT ALL COOKIESSET COOKIE PREFERENCES×
Manage consent