One Million Downloads Of Blood Donor App, The Story Of Its Success

We were thrilled when we recently reached an epic milestone in our collaboration with the American Red Cross, 10 million downloads of the suite of apps that we have created for the charity over the years. One app, in particular, Blood Donor, has been a resounding success and achieved its own landmark achievement. It’s an app that has saved lives, changed the industry and provided the team with a great sense of achievement, here’s the story of Blood Donor… 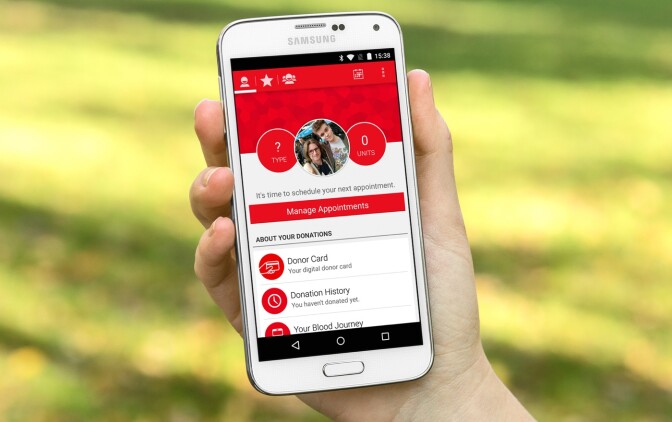 Why build the Blood Donor app?

When the American Red Cross approached 3 SIDED CUBE in early 2014, they were looking for a solution to combat the significant drop-off of blood donors in the US.

They wanted to develop a mobile app that could act as a booking system that would encourage, motivate and engage potential and existing blood donors, allowing them to save lives across the country.

With blood bank reserves running low and a slightly outdated outreach program, we needed to give the American Red Cross the tools to help them continue the great work they had done so far.

We developed an innovative mobile solution that has won several international awards including a Webby for Best Health App but more importantly helped to bring in over $70million in revenue for the charity.

Working alongside the American Red Cross we realised that there were a few barriers that needed to be overcome. Potential donors, particularly the younger sector, weren’t engaging with the existing marketing literature, appointments were being forgotten, cancelled or ignored and after an initial donation, they wouldn’t return to donate again.

Mobile was identified as a relatively untapped resource that could help to change the behaviour of both potential and existing donors and so Blood Donor was developed and launched in September 2015.

What does the app do?

The main aim was to make Blood Donor convenient for the user. The easier it is to schedule or reschedule appointments, the more likely that donors would book their slots at a blood drive near them. Appointment reminder notifications mean that they are more likely to show up, and geo-targeted blood shortage alerts let users know if their blood type is particularly needed near them.

But it’s not just the logistics that Blood Donor helps with – it works on a reward basis to encourage repeat visits and donations. Users can earn badges to proudly share their achievements with friends and family and can even claim rewards from selected retailers for their efforts.

One of the most exciting features is without a doubt the Blood Journey. Donors can actually track their blood and see the hospital that it ends up at and when it has arrived. Being able to obtain this level of detail is amazing and can really encourage donors to keep going as they can appreciate the lives it is going to save, rather than wondering where it goes after it’s packed up and they’ve walked off, cookie in hand.

A whole host of features and ultimately the simplicity of the app, have made Blood Donor into the success story it is today. With over a million downloads and almost 470,000 donations made, as a result, it means that potentially 1.5 million lives have been saved. The app has also boosted show rates. Before the app, just over half (57%) of appointments would be fulfilled, now, with Blood Donor, this has rocketed to 83%.

We’re incredibly proud to have experienced the level of success that we have with this app, and it makes it all the more satisfying to know that we’ve had a hand in saving lives across North America. We hope that the numbers will continue to grow and Blood Donor will aid the American Red Cross in their mission to prevent and relieve human suffering.